The Lahti Symphony Orchestra’s 23rd Sibelius Festival will be held at the Sibelius Hall in Lahti from 31 August to 4 September 2022, with Dalia Stasevska, chief conductor of the orchestra, as its artistic director. The festival will be opened by an international guest appearance of the highest calibre, when the Estonian Festival Orchestra, consisting of European musicians, will perform on Wednesday 31 August, conducted by the renowned Estonian conductor Paavo Järvi.

The Lahti Symphony Orchestra will give three concerts at the festival conducted by Dalia Stasevska. The theme of the orchestral concert on Thursday, 1 September 2022, is ‘Flora and Fauna’, and the concert will feature Pan and Echo, the concert suite from Pelléas et Mélisande, The Wood-Nymph (melodrama) and Snöfrid.

The programmes for the orchestral concerts on Friday 2 September and Saturday 3 September were originally chosen by Jean Sibelius himself. ‘In Sibelius’s time, it was typical that the première of the new work took place in a concert organized by the composer himself. This allowed composers to present their other works as well. Sibelius was especially careful to ensure that his premières took place at concerts where the repertoire consisted exclusively of his own compositions’, explains Stasevska, and continues: ‘The Friday and Saturday orchestral concerts at the Sibelius Festival are programmes chosen by Sibelius himself from 1911 and 1927. These included the Finnish premières of the Fourth and Seventh Symphonies and Tapiola. These reconstructed concerts allow us an interesting glimpse into the music of Sibelius as presented by the composer himself.

As an innovation, a family concert, ‘Melody Forest’, will also be included in the festival programme, on the afternoon of Saturday 3 September. The festival concludes with another new kind of collaboration, at Lahti Church of the Cross on Sunday morning, 4 September, with a Keski-Lahti parish church service, the musical content of which focuses on the music of Sibelius.

The festival will also feature a piano recital, and the concerts are complemented by other events such as pre-concert talks. Further details of the festival programme will be announced later and ticket sales will start in February (date to be announced) via the ticket agency Lippupiste. 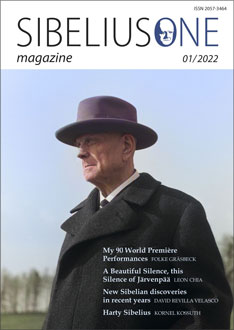 The January 2022 issue of Sibelius One’s magazine is in the final stages of production and will be sent out to subscribers during January.

To add the magazine to your membership or order back copies, please see our Magazine page (click here).

Articles in this issue: 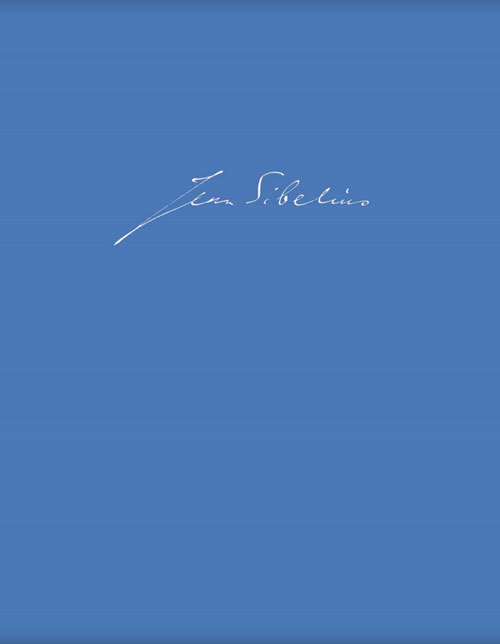 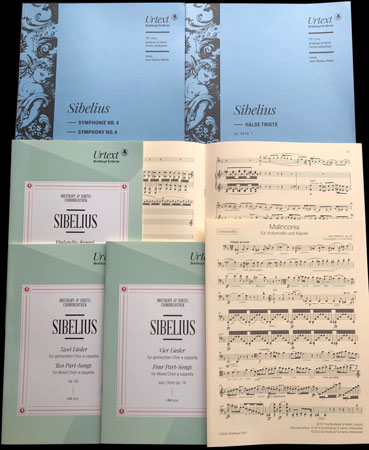 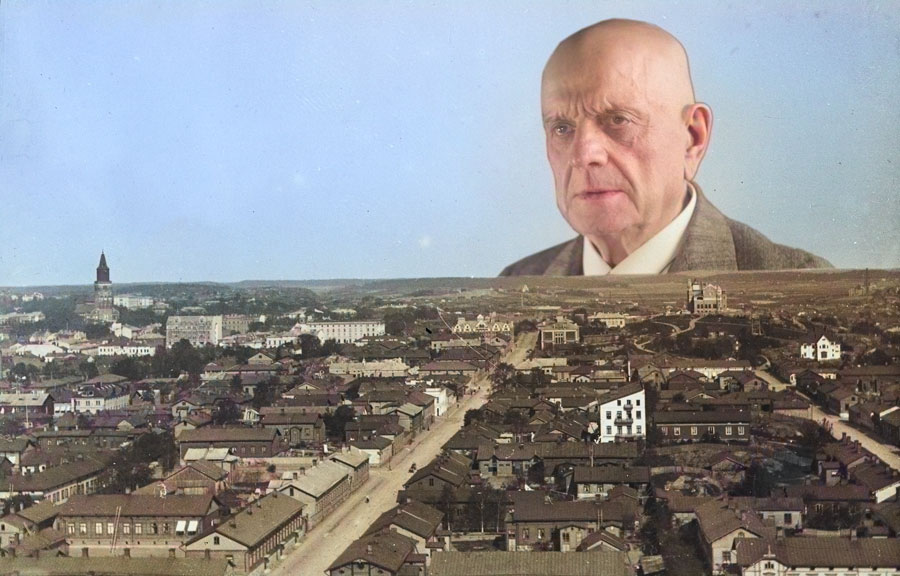 Our New Year Quiz 2022 is a two-part puzzle called ‘Where has Sibelius been’ – a set of multiple-choice photo questions followed by a word square.

Image: The city of Turku in 1920, the year after Sibelius conducted the first performance of his cantata ‘Jordens sång’ there. City photo: Public Domain. Sibelius image by Santeri Levas / Finnish Museum of Photography. Colourized. 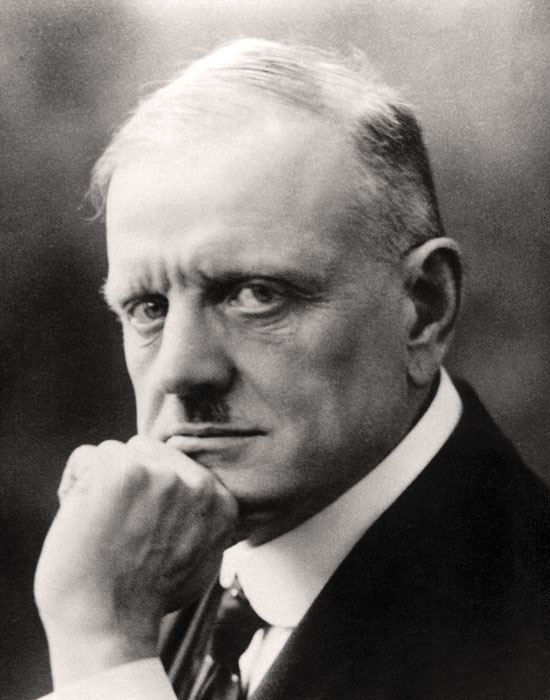 A Sibelius Commemorative Concert will take place in Melbourne, Australia, to celebrate the 156th anniversary of the composer’s birth.

This free event will feature an all-Sibelius programme arranged and performed by the Inventi Ensemble and soprano Jessica Carrascalão Heard. 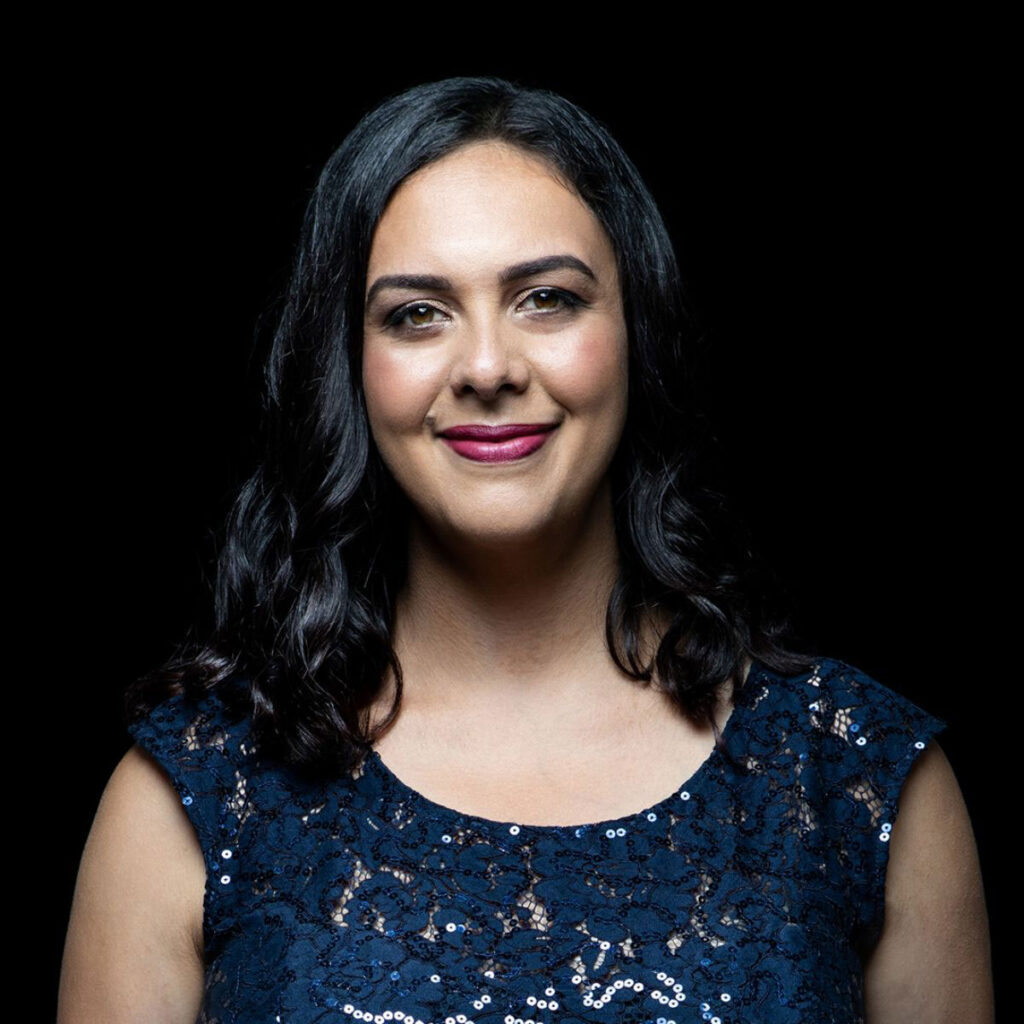 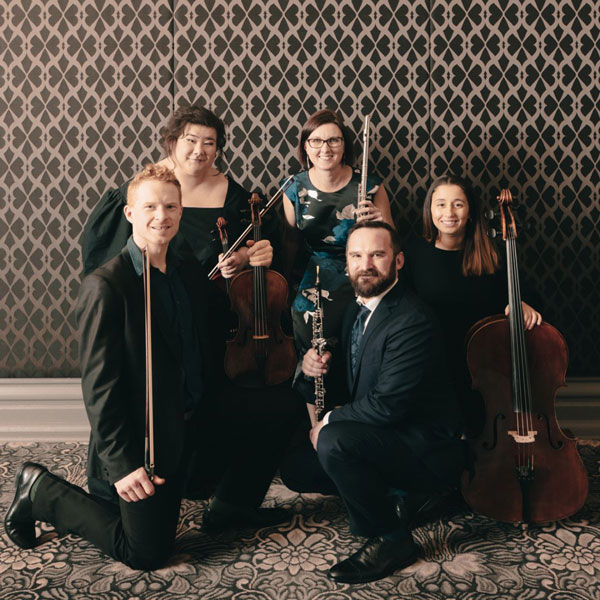 The event is arranged by the Melbourne radio station 3MBS and is sponsored by Geoff Hayes, a member of Sibelius One.

It will take place on Wednesday 8 December 2021 at 11:15am (for an 11:30am start) at the Good Shepherd Chapel, 1 St Heliers Street, Abbotsford, Victoria, Australia

All guests are required to be fully vaccinated. Please ensure you have your certificate for verification at the Chapel entrance. Face masks must be worn indoors at all times.

John Davis, President of Sibelius One, passed away on 27 October at the age of 92.

John was interested in Sibelius since the early 1940s, when his father took him into a music shop in Bristol bought him his first record – a 78 of movements from the Karelia Suite – just at the time that news was coming through of the Russian invasion of the Karelian Isthmus. He was heavily involved with the Torbay Recorded Music Society for over half a century and co-ordinated large music groups travelling in the UK and internationally.

John’s first ‘live’ concert experience was watching Sir Henry Wood conduct Tchaikovsky’s Fifth Symphony in the Pump Rooms in Bath in the early part of the war. His parents were both musicians, his mother being a former LRAM piano tutor (her pièce de résistance was the Sibelius Romance in D flat major – his initiation into the piano world of Finland’s greatest composer) and his father a church organist. After the family moved from London to the Bristol area during the war, John’s father went around various churches repairing and tuning organs, and at this time John himself developed a keen love for and interest in this instrument. Right from his earliest samplings of classical music on disc, John was an avid fan of the Phila­del­phia Orchestra and Leopold Stokowski.

As well as being devoted to music, John enjoyed a distinguished career in the Royal Navy and as a driving test examiner, conducting over 32,000 tests.

After moving to South Devon, he joined the Torbay Gramophone Society (later to become the Recorded Music Society) in 1958 and soon became embroiled in its management. This  led him to present programmes nationwide with subjects including Sibelius, Stokowski and music for orchestra and organ. In 1970 he was a founder of the Torbay Musical Weekends, held at the sumptuous Palace Hotel in Torquay; in this context he worked with guest presenters of the highest calibre including Sir Georg Solti and Sir David Willcocks.

In the 1960s he started co-ordinating groups to attend ‘live’ concerts across this country, particularly in Birmingham, Exeter and London. A trip to Prague to hear the Czech Philharmonic Orchestra play Má vlast by Smetana was the start of a whole series of group musical trips to Europe and the USSR.

John’s knowledge of and enthusiasm for music were as legendary as they were infectious, and his good humour and kindness will be fondly remembered by all those lucky enough to meet him. He is survived by his wife Christine, daughter Julia, son Edward and four grandchildren. 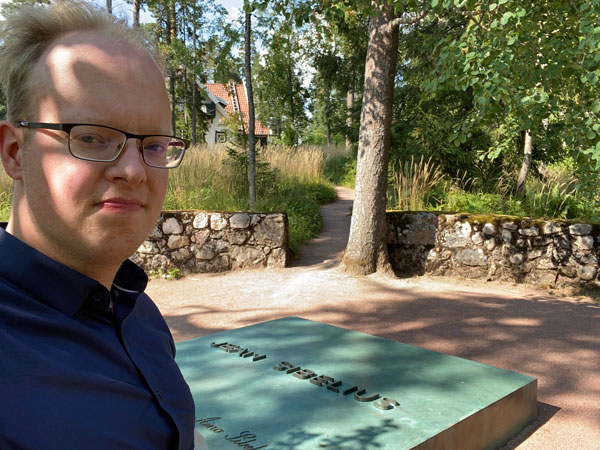 The arrangement by Luukas Hiltunen of the Scène d’amour from Sibelius’s ballet-pantomime Scaramouche has been played at a concert at the composer’s home, Ainola. The performance, on 26 July 2021, was given by the Kamus String Quartet (Terhi Paldanius and Jukka Untamala, violins; Jussi Tuhkanen, viola; Petja Kainulainen, cello) as part of ‘Meidän Festivaali’ (‘Our Festival’).

Scaramouche is one of the longest and most unusual of Sibelius’s large-scale scores, and the composer himself made piano arrangements of two passages (Danse élégiaque and Scène d’amour) and a violin/piano version of the Scène d’amour.

Luukas Hiltunen has previously made arrangements for symphony orchestra of Sibelius’s organ works Intrada and Surusoitto, and his First Symphony (2019–20) reflects his familiarity with Sibelius’s style of writing music for orchestra. The symphony has been published: the score and performance materials are now available through Universal Edition (UE) online shop: https://www.universaledition.com/luukas-hiltunen-7879/works/symphony-no-1-30501. Luukas Hiltunen is currently working on his String Quartet No. 1, ‘A tale of two lovers’. The subtitle alludes to the programmatic content of the work, loosely inspired by William Shakespeare’s Romeo and Juliet. The work will play for around 40 minutes and performance materials will be available both in printed and digital forms through Universal Edition AG.

Previous performances of the Scaramouche arrangement have taken place on 23 March 2018 at the Church of the Cross, Lahti, Finland (Lahti Conservatory String Quartet), 21 July 2019 at the Sibelius Hall, Lahti (string quartet from Orkester Norden) and 1 May 2021 at Korundi House of Culture, Rovaniemi (Lapland Chamber Orchestra). 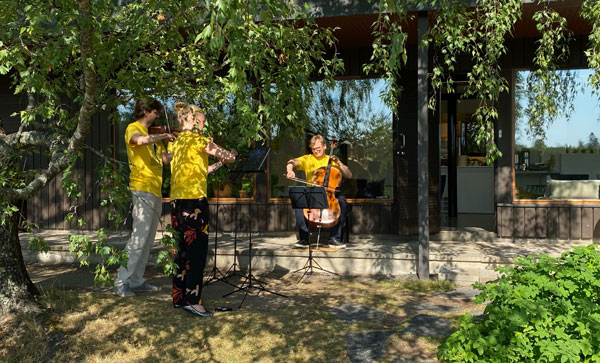 Members of the Kamus Quartet at Ainola’s Cafe Aulis 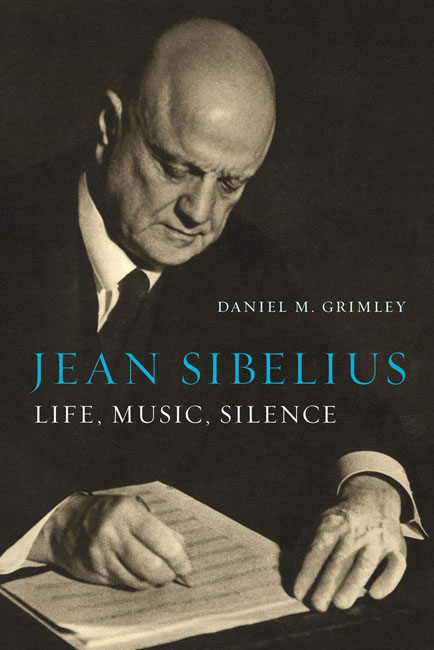 Daniel Grimley is Professor of Music at the University of Oxford and Douglas Algar tutorial fellow at Merton College. His books include Delius and the Sound of Place (2018).

To quote the publisher’s website: ‘Few composers have enjoyed such critical acclaim – or longevity – as Jean Sibelius, who died in 1957 aged 91. Always more than simply a Finnish national figure, an “apparition from the woods” as he ironically described himself, Sibelius’s life spanned turbulent and tumultuous events, and his work is central to the story of late nineteenth- and early twentieth-century music. This book situates Sibelius within a rich interdisciplinary environment, paying attention to his relationship with architecture, literature, politics and the visual arts. Drawing on the latest developments in Sibelius research, it is intended as an accessible and rewarding introduction for the general reader, and also offers a fresh and provocative interpretation for those more familiar with his music.’