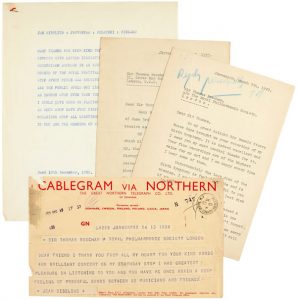 Two typed letters, signed (‘Jean Sibelius’) in pencil, to Sir Thomas Beecham, and a telegram, were offered for auction at Sotheby’s (Sale L20403).

The autograph manuscript of Sibelius’s piano piece Spagnuolo, JS 181, will be auctioned by Sotheby’s in New York. The sale takes place on 13 December 2018 at 10.00am EST, and the piece has an estimated value of $20,000—$30,000. It is a fair copy, in black ink, in piano score on eleven systems, each of two staves. The manuscript clearly bears Sibelius’s signature. No place or date are indicated but the work dates from 1913, between the Fourth and Fifth Symphonies. Spagnuolo is a sparkling work, a Spanish dance viewed through Northern eyes.

It forms part of a sale of items from a private collection of music manuscripts and letters. In addition to music, the collection includes letters representing some of the world’s most renowned figures in the fields of art, literature, science and government. This exceptional collection of highly important material was amassed in the first half of the twentieth century.

This is the autograph manuscript of Sibelius’s most famous chamber work and features the original ending, which differs from the published version. The original ending can be heard on a recording by the Tempera Quartet on BIS-1466 (or BIS-1903/05).

The large number of new recordings of ‘Voces intimae’ (see e.g. our Discography & Recordings page) in recent years have confirmed its status as one of Sibelius’s middle-period masterpieces.

The quartet was completed in 1909 and published by Lienau the same year. Although this manuscript was used by Sibelius’s publisher to set up the first edition in 1909, it contains important differences from it. The final twenty-one bars differ markedly from the printed scores and were evidently completely rewritten on a later manuscript.

This is the sole surviving manuscript of the whole work.

Click here for further information (pdf) about this and works by other composers that were be auctioned. 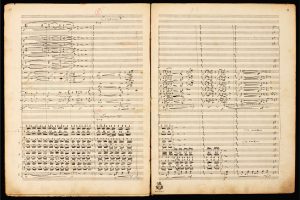 Of the four Sibelius manuscripts auctioned at Sotheby’s on 24 May 2016, two found buyers.

Several major Sibelius manuscripts are being sold at auction by Sotheby’s, London, on 24 May 2016.

It is rare for major Sibelius manuscripts to be sold, and even rarer for a number of important manuscripts to be offered at the same time. All of the works in question are among the pieces that were published by Robert Lienau in the first decade of the twentieth century.

Foremost among these is the autograph manuscript of Pohjola’s Daughter; Sotheby’s remark that ‘no manuscript of this importance and calibre has appeared on the market for over ten years’. Also on sale are the primary sources for the final version of the Violin Concerto (although most of the autograph score is lost) and the complete piano transcription of the incidental music to Pelléas et Mélisande. Finally there is a set of eight autograph fragments, plus a score containing other revisions, pertaining to the male choir version of the patriotic cantata The Captive Queen.

The Pelléas manuscript is of particular interest because it contains two previously unknown piano transcriptions of movements that were omitted from the published piano version of the suite.