Whereas the Busonian theme manifested itself by conventional means – with the inclusion of several works by Busoni on the programme, the participation of the excellent young Italian cellist Domenico Ermirio, numerous references to him in the introductions to the works presented by Folke Gräsbeck and a Sunday afternoon lecture on Sibelius and Busoni, the theme of ‘a visit from Sibelius’ was brought vividly and unexpectedly to life at the concert on Saturday evening. Instead of making a conventional entry into the concert salon, Sebastian Silén started to play Sibelius’s Étude at the other end of the building, walking slowly towards the audience – dressed as the young Sibelius, travelling forwards in time from 1887! There followed an exquisitely judged ‘interview’ with Sibelius – slightly tongue-in-cheek, yet informative and spontaneous – with the festival’s artistic director Folke Gräsbeck asking the questions.

Silén was perfectly cast as the young Sibelius – a role he has indeed played before, in Douglas Sivén’s documentary film ‘Sibelius i Korpo’ (click here for more information and sample video), produced for the 2015 Sibelius anniversary year in collaboration with Svenska Yle as well as Swedish and Danish TV. The documentary tells the story of Sibelius and his family’s visits to Korpo in 1886 and 1887, and the music he wrote there, and was screened in its entirety in Korpo on the Sunday morning of the festival weekend. (Moreover, as Folke Gräsbeck pointed out, the character representing Sibelius in Adolf Paul’s autobiographical novel En bok om en människa [1891] is named Sillén!]

A further point of contact between the film and the festival’s programmes was the  ‘Hafträsk’ piano trio, JS 207, which is featured extensively in the film and which began the Sunday afternoon concert. Since the BIS recording of this important chamber work was made in 2002, information has come to light that clarifies a number of uncertainties in the manuscript and, significantly, allows us to differentiate between two separate versions of the first movement. At the Korpo concert we heard what is believed to be the later of these two versions.

One welcome feature of the festival in Korpo is that it showcases music in different genres: this year instrumental, chamber and vocal works. The songs – by Armas Järnefelt as well as Sibelius – were admirably performed by Hedvig Paulig, winner of the international Sibelius Singing Competition in Järvenpää in 2011. At the official concerts she was accompanied by Folke Gräsbeck, whilst for an outdoor performance by the Sibelius statue in the centre of Korpo village she was accompanied by Erkki Korhonen, director of the Sibelius Birth Town Foundation, Hämeenlinna. The Sibelius songs came from the very beginning and very end of his song-writing career and included one world première public performance (the early Löjet var utan hem, to words by Runeberg).

A special authenticity was lent to the music-making by the participation of Sibelius’s granddaughter Satu Jalas, playing Sibelius’s own violin and relating her memories of her grandfather. On this occasion she performed not only a selection of shorter pieces from the time of the First World War (some of which she had performed for Sibelius) but also the ambitious F major Violin Sonata of 1889, written just two years after the composer’s summer at Korpo gård and already hinting at the tougher musical style that was to emerge just a couple of later, even if the composer – uncharacteristically – gave a number of programmatical hints concerning the piece’s meaning and inspiration.

Special thanks are due not only to the musicians, led with consummate professionalism as always by Folke Gräsbeck, but also to Tuulikki Wahe-Röhrbach, current owner of Korpo gård, the splendid house frequented by the Sibelius family in 1887, where all three concerts at this year’s festival took place, and to festival manager Petri Kirkkomäki and his team, whose relaxed and friendly style ensured that the festival’s traditionally friendly and intimate character of the event was maintained despite the capacity audiences. 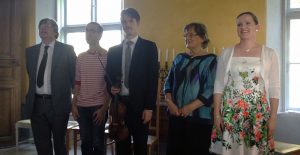 There was also the traditional annual ceremony, with music, speeches and flowers, at the Sibelius statue in Korpo village, at 1 pm on Saturday 23 July, with festival organizer Petri Kirkkomäki, Hedvig Paulig, soprano, and Erkki Korhonen from the Sibelius Birth Town Foundation, Hämeenlinna. On Sunday 24 July at 11 am there was a screening of Douglas Sivén’s documentary film ‘Sibelius i Korpo’ and at 2 pm there was a lecture on Sibelius and Busoni given by Andrew Barnett.