The Organizing Committee of the 7th International Jean Sibelius Conference (scheduled to take place on 7–9 September 2020) has published the following important announcement for all participants:

The pandemic together with its repercussions may affect  arrangements for the Conference both on the organizers’ and participants’ side. Therefore, even if the restrictions were removed or moderated, the Organizing Committee has to assess whether arranging the Conference in September is realistic.

Because the Finnish Government will make new decisions about the state of emergency by 13 May 2020, the Organizing Committee will also decide at that time whether the Conference will be held in September 2020, or whether it is cancelled or postponed, and will inform participants about the decision by 15 May.

If  the Conference can be arranged in September, please note that the registration form should be sent and the participation fee paid by 31 May. Participants giving a paper in the Conference will receive guidelines for writing the article by 15 May, if the Conference takes place as planned.

Wishing you good health and safety, 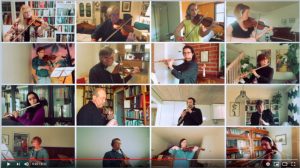 The Lahti Symphony Orchestra’s concerts are currently cancelled owing to coronavirus/Covid-19, but the orchestra has recorded Sibelius’s Finlandia, each player performing at home and using mobile phones as the recording equipment.

Thanks to the orchestra for making this recording available – and stay safe and healthy!

Mosquitos – the curse of the Finnish summer for anybody who ventures into the countryside.

But new research indicates that there is a simple way to keep these irritating insects away: play or listen to music by Sibelius!

A research project under controlled conditions involving 20 brave human volunteers and several million mosquitos (sourced from the Sibelius Forest near Hämeenlinna) has shown that the insects react in very different ways when played music by different composers – and Sibelius’s music came top of the list for keeping them away.

The 20-minute-long tests were carried out in controlled netted areas, and (to simulate potential real life situations) recordings of various pieces of music were played back on a mobile phone. When music by Sibelius was tested, the mosquitos formed an orderly swarm in the immediate vicinity of the phone and did not bother the human test subjects at all. Project leader Prof. E. Ticker said: ‘We were very surprised the the mosquitos reacted in this way, and cannot yet explain this behaviour. It may be that they recognized the nature imagery in the music; or it may simply be they they have far more sophisticated cultural tastes than was hitherto believed.’ He continued: ‘We do, however, recommend that you refrain from answering your mobile phone if it rings while mosquitos are swarming around it.’

Below are selected test results for various musical works:

Sibelius: Tapiola: reduction of frequency and severity of mosquito bites by approx. 100%.

Vaughan Williams: A Pastoral Symphony: no measurable change in frequency of mosquito bites, but several cows from a neighbouring farm gathered round and looked over a gate at the experiment.