Jean Sibelius: Complete Works (JSW) – SON 630
edited by the National Library of Finland and the Sibelius Society of Finland 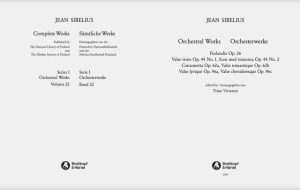 On Breitkopf & Härtel’s website, the latest release in JSW complete critical edition has an innocuous subtitle: ‘Revisions and arrangements for orchestra’. It includes seven works, the majority composed as incidental or tableau music for the theatre. But when we bear in mind that two of these works are Finlandia and Valse triste, the importance of the release for the series as a whole becomes readily apparent.

Finlandia counts as a revision because it started life as the finale (Finland Awakes) to a set of patriotic tableaux, the Press Celebrations Music of 1899. Timo Virtanen’s introduction to the present volume provides a fascinating account of its transition from tableau into independent concert work, and the two revisions to the ending (the first of which may not have been performed at the time). The fragile existence of musical works at the turn of the century is highlighted by the story of Sibelius losing the score on a trip to Germany in the autumn of 1899; his regular copyist Ernst Röllig had to recreate it from the orchestral parts in Helsinki. The longer of the early endings is reproduced in full as an appendix; the very first ending will presumably appear in a future JSW volume with the rest of the Press Celebrations Music in due course.

A critical edition such as JSW does not primarily exist to provide guidance on interpretation, but sometimes accurate markings (or lack thereof) can influence conductors’ choices quite audibly. Some such considerations in Finlandia are as follows:

1) Timpani, bars 8–9
JSW discusses whether the timpani trills in bars 8–9 should be continuous or separate, noting that the continuous trill lines in the earliest set of parts is ‘unambigious’.

2) Adaptation to horn part
Many Finnish orchestras change the horn parts 4 after F (end of bar 102) to include an upper octave at the end of the phrase. This has been loosely attributed to the composer, players sometimes remarking that ‘in the Helsinki Philharmonic Orchestra they say Sibelius always played it this way’. JSW includes no information in any sources about any change at this point; nor does a sound/video recording of Georg Schnéevoigt conducting the work with the HPO in 1934 include this change (although it has other retouchings to the scoring). On the other hand, JSW does point out that Sibelius conducted the piece in Finland only once after its publication (6 July 1920). Taken together, the evidence therefore suggests that it is unlikely that such an alteration was proposed to the HPO by the composer. 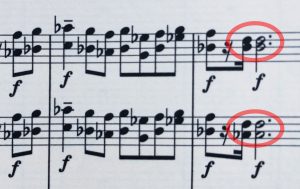 JSW evidently does not sanction the changes to the horn part heard in some performances.

3) Tempo for the ‘hymn’ section
Many conductors slow down for the famous ‘hymn’ passage (letter I / bar 132) although no change of speed is marked in the score; others endeavour to maintain a consistent Allegro tempo. JSW notes that the earliest sets of parts bear the marking Poco allegro at this point, which would suggest a slight relaxation. The piano transcription, on the other hand, is marked Sempre Allegro, implying no slowing down. 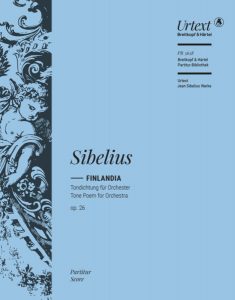 The Urtext of Finlandia is available separately (without critical comments); score and parts can be ordered at https://www.breitkopf.com/work/20205

The next four pieces all originate in the music Sibelius wrote for his brother-in-law Arvid Järnefelt’s Symbolist play Kuolema. From the original theatre score of 1903 he extracted and revised Valse triste and the Scene with Cranes (the latter a conflation of two of the original musical numbers). Whereas Valse triste was an immediate and enduring success, however, Scene with Cranes was played just a handful of times during the composer’s lifetime and remained unpublished until 1973, by which time it has become known internationally through the recording made by Paavo Berglund in 1970 (as one of the fill-ups on his 2-LP world première recording of Kullervo).

The Canzonetta and Valse romantique were composed for a 1911 revival of Kuolema, for which the play was revised significantly, rendering much of the original score unusable: of the original pieces, only Valse triste was reused, and that was played in its revised concert version. As a result of the circumstances of their composition, the two ‘new’ pieces were subjected to very little by way of revision, although Sibelius did write about the need to make some changes in the Valse romantique. Critical opinion at the time and ever since has been more favourable to the Canzonetta – an exquisite miniature for strings alone that is full of characteristic Sibelian twists and resemble to some extent the slow movement of the Third Symphony – than to the relatively conventional Valse romantique with, as so pertinently pointed out by the reviewer Otto Kotilainen in 1911, its ‘peculiarly hobbling waltz theme’ (‘omituisesti onnahtawa walssiteema’).

The main theme of the Canzonetta has a gentle melancholy comparable with the slow movement of the Third Symphony.

The two waltzes that conclude the volume are later works, and also exist in versions for solo piano. They are the outer pieces in Sibelius’s Op. 96 grouping, the middle one being the vocal duet Autrefois. Of the two, Valse lyrique (for piano 1919, orchestrated 1920) was more frequently performed at the time and remains so today. Its material was first used in a much shorter piano piece, Syringa (The Lilac, 1914), that was planned as part of the Op. 75 set of piano pieces, ‘The Trees’. Having been omitted from that set, it resurfaced five years later in a hybrid form, combined with another ‘tree’ piece, Granen (The Spruce). Although that version was in many ways an excellent composition, Sibelius nonetheless decided to rework it again, splitting it back into its two component parts and reworking each of them (see the introduction to SON 616, Piano Music Volume 3, for more information on the origins of Valse lyrique).

Valse chevaleresque (1921–22), somewhat in the manner of Johann Strauss, is reputedly Aino Sibelius’s least favourite work by her husband. Sibelius’s schoolfriend Walter von Konow claimed that Sibelius had improvised the piece in his presence after a visit to the Uffizi gallery in Florence many years earlier, but had then refused to publish it.