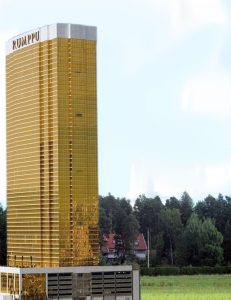 Latest rumours suggest that a massive 58-storey hotel is to be built adjacent to Jean Sibelius’s home, Ainola.

The hotel is to be constructed and run by a major American corporation and will include top-quality luxury fittings such as gold taps, gold toilets and gold minibars. Each room will also come with its own tanning bed. In the grounds of the hotel there will be a private golf course.

To protect hotel guests from unwelcome attention from visitors to Ainola, the construction firm is promising to build what a spokesman described as ‘a big, beautiful wall’.  It is understood that the costs for the construction of the wall will be borne by the Ainola Foundation.

A spokesman has revealed that advance bookings are buoyant, with ‘at least a million and a half’ people having already made reservations for the inauguration gala.

So full will the hotel be that the management is proposing not to accept any clients from a number of countries, mostly in the Middle East. It is unclear whether this proposal is in accordance with local laws.

In anticipation of significant demand from top businessmen and politicians, super-secure internet and telecom services will be provided by a Russian corporation.

‘Adult’ services at the hotel will also be provided by Russian partners. A spokesman for the company claimed ‘They’re the best in the world’.

The American firm is stepping in following the collapse of a similar European project, following a decision from a major British investor to withdraw its support by March 2019 at the latest. The British firm is understood to haver significant interests in the fishing industry and to be a market leader in the supply of kippers.

Sibelius One has been unable to verify this news story. Alternative facts may occur.