Test your knowledge of Sibelius trivia with this quiz to kick off the composer’s 150th anniversary year! Click here for the 20 multiple-choice questions – and good luck! 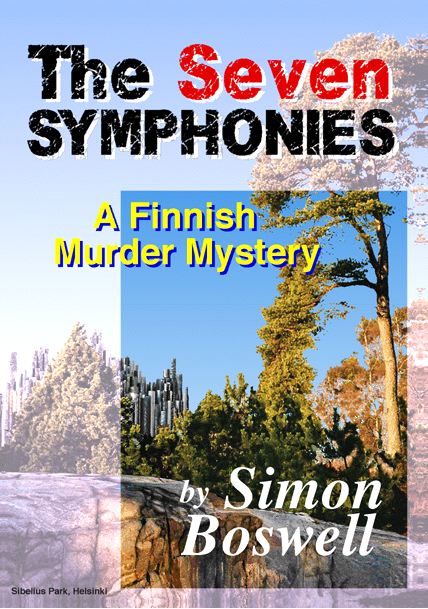 If you haven’t yet come across The Seven Symphonies, the intriguing murder mystery set against the backdrop of the Finnish music world – and Sibelius’s symphonies in particular – click here for more information! 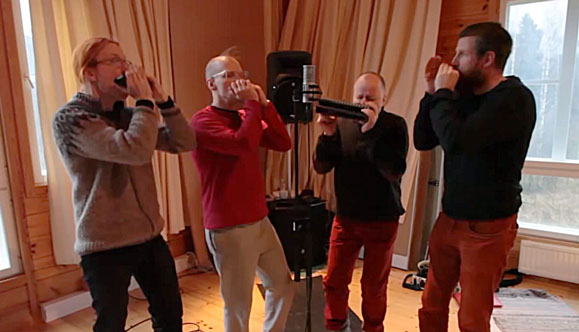 Confident in the belief that Jean Sibelius took not only his cigar but also his harmonica with him while walking in a forest of Ainola, the Sväng harmonica quartet (Eero Turkka, Eero Grundström, Pasi Leino and Jouko Kyhälä) is celebrating the 150th anniversary of the composer’s birth in 2015 with a comprehensive take on Sibelius’s music.

The players have been working hard on the arrangements and rehearsals and have released a preview of their recent studio work featuring extracts from Valse triste, the Karelia Suite and Andante festivo.

At Villa Gyllenberg in Helsinki – one of Finland’s foremost private museums – on 15th December 2014 the pianist Folke Gräsbeck was awarded the Sibelius Medal of the Sibelius Society of Finland, presented by Lauri Tarasti, president of the society since 2009. This medal has been awarded since 1965 and was designed by Eila Hiltunen, who also created the Sibelius monument. The medal is awarded both to individuals and organizations for their outstanding achievements as performers or supporters of Sibelius’s music, as well as to researchers. Previous recipients have included Urho Kekkonen (President of Finland), Aino Sibelius, Herbert von Karajan and many of Finland’s foremost conductors. In 2010 the medal was awarded to Sibelius One’s Andrew Barnett.

Folke Gräsbeck is the foremost exponent of Sibelius’s music for and including the piano. The American magazine Fanfare wrote of his recordings: ‘Gräsbeck makes a most persuasive case for just about all of this music, and Sibelius’s output for solo piano will likely never again be recorded as comprehensively or as well.’

The medal was presented at an event to mark the launch of the new critical edition of Sibelius’s Violin Concerto in Breitkopf & Härtel’s JSW series. The new volume (SON 622) is edited by Timo Virtanen, editor-in-chief of JSW, includes not only the familiar 1905 version of the concerto but also the original 1903/04 version, with detailed comments both in the preface and the critical report. The launch event included a performance of the revised version of the concerto in Sibelius’s own arrangement for violin and piano, performed by Petteri Iivonen – second prize winner in the 2010 International Jean Sibelius Violin Competition and Folke Gräsbeck. After receiving the medal Folke Gräsbeck played a piano solo rarity, the Largo in A major, JS 117 (1888).

Me and my Sibelius: Jaakko Kuusisto

A new feature in which distinguished Sibelius interpreters give an insight into their experiences and attitudes to Sibelius and his music.

Please contact us at the latest by 15th December 2014 if you wish to be part of the Sibelius One group at the Festival in 2015, as tickets and hotel rooms are selling out FAST. Further information on the page ‘Visit Finland’.

On 8th December 2014 a new element is added to the Sibelian landscape in the composer’s home town of Hämeenlinna: a musical experience park, the first of its kind in Finland. In the Sibelius Park, home to one of Finland’s most recognizable statues of the composer, five benches – positioned far enough apart to avoid mutual interference – have been equipped with with sensors so that music is played when visitors sit on them. The music chosen is the popular set of five piano pieces, ‘The Trees’, Op. 75.

The Aeon Duo (Essi Kiiski, violin and Eduardo Andrade) will give a concert focusing on Sibelius’s music for violin for piano, plus the world première of a work inspired by Sibelius composed by Eduardo Andrade, at the Finnish Church in London on Thursday 26th March 2015 at 7 pm. The concert will be part of the official Sibelius 150 schedule of events and will be an exciting and innovative combination of music, photography and taste sensations.

Further details and information about discounts for Sibelius One members will be announced in January 2015.