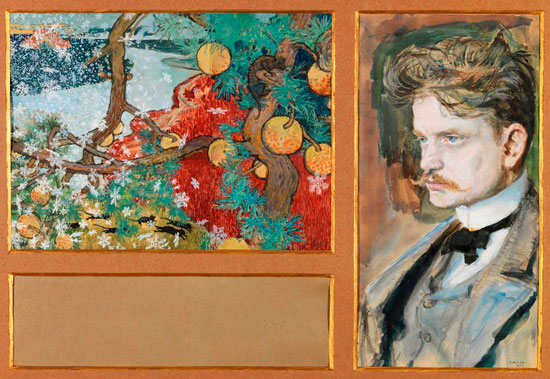 After four in-depth terms on Russian music, one on the Czechs and the most recent on the Hungarians, David Nice’s course covering national identity in music turns to Finland, where one name towers above all the others: that of Jean Sibelius. While he only started learning to speak Finnish aged 9 at one of the country’s first national schools – Swedish was his mother tongue – Sibelius’s musical consistency is absolute, from the early tone poems and the programme symphony Kullervo of the early 1890s through to his turning away from all major works in the 1920s.

We’ll be following the adventure from the bracing early masterpieces through to the supreme concentration of the Seventh Symphony and Tapiola, with excursions to the music of other Finnish composers both contemporary with Sibelius and of later generations. Hopes are high for the kind of special guests who’ve been a feature of earlier courses – among them conductors Vladimir Jurowski, Antonio Pappano and Paavo Järvi; pianists Pavel Kolesnikov and Samson Tsoy; violinists Alina Ibragimova and Josef Špaček; and harpist Jana Boušková.

A wide range of works will be illustrated with excerpts on CD, DVD and YouTube.

‘I cannot recommend these classes highly enough. The classes, all guided by the expert hand of David Nice, comprise discussion, listening to recordings and watching scenes on DVD as well as interviews with internationally renowned singers, conductors and directors who have a particular association with the works being studied.’ – Susan Bullock MBE, soprano and regular class visitor

Fee: £100 for the whole term of ten two-hour classes on Zoom

A short series of 3 concerts and 3 lectures – mostly in April with one concert in June – will give a foretaste of the seventh Sibelius Festival Golfo del Tigullio e Riviera (which will take place in September 2022). The festival was held for the first time in 2015 and is dedicated to Sibelius and the music scene in the Nordic countries and northern Europe, with repertoire ranging from late Romanticism to contemporary works. Artistic director of the festival is Federico Ermirio.

Image from the Finnish National Opera and Ballet’s website

According to the Finnish National Opera and Ballet’s website, ‘Jorma Elo’s new ballet is about Jean Sibelius and his creativity, which inspires him to push forward. Nevertheless, his life wouldn’t be possible without Aino – her love, creativity and understanding. Though Jean is the main character, the story is both Aino’s and Jean’s. Their love is at the heart of the ballet, and the audience is shown each character’s point of view. Aino and Jean’s burning love and passion is a constant through the decades, in spite of the obstacles… Jorma Elo explored Sibelius’s work in depth to find the most suitable music for his ballet. Excerpts from several different pieces come together beautifully in a score that follows the composer’s life. Sibelius’s compositions for the stage, which are particularly fitting to the story, are complemented by pieces close to Elo’s heart, such as the Violin Concerto, Symphony No. 5 and Finlandia.’

The ballet traces key moments throughout Sibelius’s long life. A degree of artistic licence has, however, heen applied to some of the events portrayed.

Choreographer Jorma Elo was born in Helsinki in 1961 and danced with the Finnish National Ballet from 1978 to 1984. He made his début as a choreographer in 2000 with The View from Over Here and Blank Snow (Alberta Ballet). Since 2004 he has worked in the USA, becoming a resident in 2010. In 2005 he was appointed as resident choreographer of Boston Ballet. Other companies with which he has worked include the New York City Ballet, San Francisco Ballet, Royal Danish Ballet, Nederlands Dans Theater, Vienna State Opera Ballet and Finnish National Ballet.

Sets and costumes are by the American designer Robert Perdziola, inspired by the paintings of Aino Sibelius’s brother Eero Järnefelt and photos of early 20th century Helsinki. The role of Jean is danced by Tuukka Piitulainen, Michal Krčmář and Henry Grey; Aino is portrayed by Rebecca King, Abigail Sheppard and Violetta Keller.

A total of nine performances are scheduled between 11 March and 14 May.

The ballet’s duration is two and a half hours (including intermission) and ticket prices range from  €20 to €129.

Click here for more information or to buy tickets.