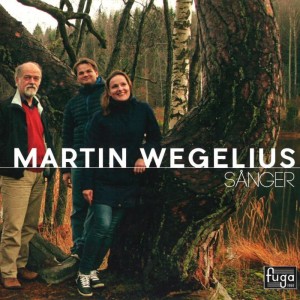 A disc of songs and folk song arrangements by Martin Wegelius has been published by Fuga (FUGA-9410).

Wegelius – who founded the Helsinki Music Institute (forerunner of today’s Sibelius Academy) in 1882, was Sibelius’s teacher there from 1885 until 1889. Wegelius was a versatile musician – a pianist, composer, conductor and critic – who had studied in Vienna, Leipzig and Munich and who would direct the Music Institute until his death. He was to prove a good friend to Sibelius and take a kindly, even paternal interest in his development. Wegelius was a capable administrator who could take the credit for many international musicians (including Busoni) coming to Helsinki. He was also an obsessive Wagnerian, with a particular fondness for Die Meistersinger; he wrote a 323-page biography of Wagner and also established the first Finnish Wagner Society. His music has hitherto been very sparsely represented on disc.

The new recording features two of Finland’s foremost young singers, the soprano Hedwig Paulig and the baritone Tuomas Lehtinen, accompanied on the piano by Gustav Djupsjöbacka. Some of the items also feature a choral part, here performed by the Spira Ensemble.

Okko Kamu’s five-year period as principal conductor of the Lahti Symphony Orchestra is coming to an end this spring with three concerts at the Sibelius Hall.

On Thursday 14th April he will conduct a programme of Zinoviev, Glazunov and Prokofief. Maaria Leino will be the soloist in Glazunov’s Violin Concerto. Further information and link to buy tickets: click here.

Kamu will be succeeded by Dima Slobodeniouk, who will conduct this year’s International Sibelius Festival in September. Sibelius One members who wish to join our group booking for the festival are asked to register their interest now. Click here for more information.