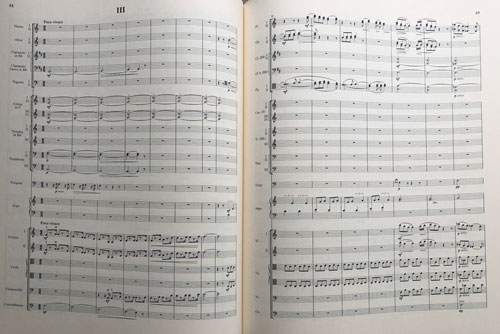 The critical edition score of Sibelius’s Sixth Symphony has been released in Breitkopf & Härtel’s JSW series, edited by Kai Lindberg. With the publication of this volume, JSW has almost completed its Sibelius symphony ‘cycle’; only the Fifth now remains to be issued.

The Sixth is often described as an ‘elusive’ work and its delicate character is not easy to capture in performance. Equally elusive is firm information concerning its origins: the compositional process stretched over many years, sometimes interlinked with work on the Fifth and Seventh Symphonies, and few sketches have survived. Sibelius was for a long time unsure whether the work would be a symphony or be cast in some other musical form. He told his son-in-law Jussi Jalas: ‘This symphony is above all a poem’. We cannot tell exactly when he started to formulate ideas for the piece, nor even when he put the finishing touches to it.

The Sixth Symphony was first heard in Helsinki on 19 February 1923, conducted by the composer, and was well received, the critics noting its ‘translucency’ and its ‘delicacy and transparency’.  It was played again three days later and Sibelius went on to perform it in Stockholm on 5 March. The process of publication was soon under way, with Sibelius agreeing a deal (with the firm of Abr. Hirsch) as early as March 1923 and the printed score ready the following year. Normally Sibelius made some changes to his scores before publication but in this case, the window of opportunity between the first performances and the engraving of the score was almost non-existent. What a contrast with its predecessor, the Fifth, which went through three versions and years of revision before the composer was satisfied!

The parts used at the first performance of the Sixth no longer exist so it is impossible to know how much was adjusted thereafter. Some facsimile pages from the autograph score reproduced in the JSW edition contain bars struck through by the composer, but these seem to be primarily the correction of handwriting errors rather than modifications as such.

The relative lack of different source materials (essentially the autograph score, proofs and printed copies of the first edition, and the study score) means that this score contains few startling revelations compared with the previous Wilhelm Hansen edition, although numerous slight inconsistencies in dynamic markings are noted. A note from the conductor Tor Mann on one facsimile page, citing information provided by Sibelius in 1956, points out some missing timpani notes in bar 79 of the finale (3 before E). Otherwise the score confirms many small details that are often lost or neglected in performance. For instance, it would be good sometimes to hear the first violins’ rhythm in bars 13 and 115 of the scherzo clearly observed, rather than rushed;  and in the same movement it’s very rare to hear any hint of the marked string crescendo at bars 153–154 (to contrast with bars 7–8 and 51–52).

As so often the comments made by Sibelius to Jussi Jalas (here mentioned in the critical commentary) offer insights from the standpoint of a performing musician. For example Jalas crossed out the Allegretto moderato tempo marking in the second movement, replacing it with Andantino – reflecting a concern that Sibelius also mentioned to his secretary Santeri Levas. Jalas also noted the composer’s wish that the quavers in the opening theme of the scherzo should be given their full time value. His comments on the tempo relationships in the finale are also fascinating, at times directly conflicting with other statements by Sibelius.

It almost goes without saying that this excellent volume is now the top reference material for this symphony in terms both of the musical text itself and the information contained in the introduction and critical commentaries.