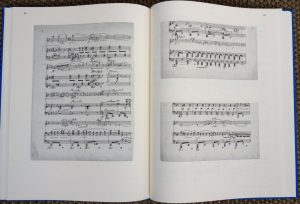 The JSW critical edition has already issued both versions of Sibelius’s Violin Concerto with orchestral accompaniment (SON 622), and this new volume adds the version with piano accompaniment of the final 1905 score, plus whatever can be rescued of the 1903–04 version. In fact, in both cases, the version with piano was completed before the orchestral score, for rehearsal purposes.

Over the years the violin and piano score has been widely available and has probably been the version that most violinists have acquired first. JSW has now updated the existing score (published by Lienau) according to its usual practice – correcting copyists’ mistakes, inaccuracies, misinterpretations and oversights, although the copies made by August Österberg are, to quote the critical commentary, ‘for the most part, written meticulously’. In this case Sibelius himself did not make a fair copy of the complete score, so important sources include the autograph score of the first movement and various copyists’ scores. The nature of the changes in the second and third movements (primarily alterations to the solo part and cuts) allowed Sibelius to work forward from the 1904 version when making the piano score of the revised version. The first movement, however, was subjected to more extensive revisions, so the entire movement had to be written out anew.

As the version with piano of the 1903–04 score has not survived intact, the present volume reproduces four fragments from the first movement as facsimile pages, and offers printed reconstructions of the last two movements. The original micro-cadenza at the end of the slow movement is included here as an alternative. In a letter to Axel Carpelan (26 December 1903) Sibelius had wished to retain this somewhat incongruous feature, but it was later crossed out in ink. The suggestion in the critical comments to this edition that ‘Sibelius may have omitted the cadenza due to his experiences in rehearsals’ (with Viktor Nováček as soloist) is very convincing. Around letter G in the finale there are two short lacunae in the piano part, as the original writing has been pasted over and any reconstruction would be speculative.

That is not to say that a reconstruction is impossible: indeed, for the BIS Sibelius Edition, both versions of the concerto are recorded with piano accompaniment (by Madoka Sato and Folke Gräsbeck); the missing sections in the piano part – e.g. first movement bars 22–53, 119–206, 265–76, 288–394, 458–541 – were reconstructed by Kalevi Aho. But a reconstruction of this scale would be quite alien to the fundamental concept and principles of the JSW edition.

Naturally there is a considerable amount of overlap between the introduction to this new publication and the same author’s (Timo Virtanen’s) introduction to the JSW orchestral score, but this is no hardship as the text is scholarly, readable and immensely informative. Information is also provided about the edition of the violin part with fingerings, bowings and other editorial suggestions by Ossip Schnirlin, prepared at the suggestion of the original publisher Robert Lienau and published in 1929 – but this edition has not been counted among the JSW source materials because ‘whether Sibelius… accepted the additions is highly questionable, even unlikely’.

In addition to the above-mentioned facsimiles from the first version’s first movement, there are numerous other facsimile illustrations. Of particular interest as well are indications from Sibelius and his son-in-law Jussi Jalas with regard to performance issues, and a discussion of metronome markings and tempo indications.