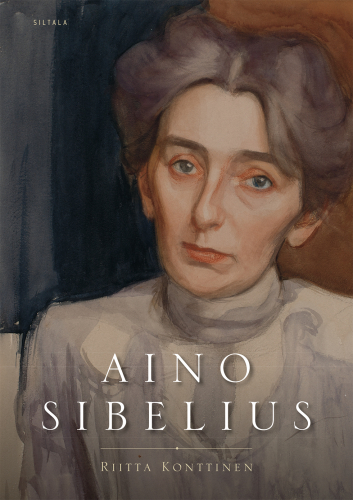 In recent years, in addition to a steady flow of new works about Jean Sibelius, an increasing amount of attention has been paid to Aino (1871–1969), the composer’s often long-suffering wife. Now a major biography of her has been published – the most extensive to date – written by Riitta Konttinen, emeritus professor of art history at Helsinki University, who has previously written about Finnish women artists such as Venny Soldan and Helene Schjerfbeck and also contributed to the book about Ainola that appeared in 2015. Konttinen points out that Aino was a remarkably strong and independent person who overcame many difficulties including the death of one of her daughters and her husband’s debts and alcohol problems.

Aino Sibelius, née Järnefelt, was born into an large and influential family: daughter of a general, with siblings who excelled in the fields of drama, painting and music. She was not only the mother of six daughters but also a highly skilled organizer whose competence at managing the family made an effective counterbalance to her husband’s impulsivity and financial naïvety. She was a talented linguist, writer, mathematician and artist as well as a fine amateur musician. Her passion for Ainola’s garden is well-known and her skilful cultivation of fruit, vegetables and berries made a significant and sustainable contribution to the family’s economy. Her empathy with and belief in her husband’s music were unshakeable even if she did become exasperated at his sometimes immoderate behaviour. Nonetheless, she kept her emotions strictly under control, especially in public. She continued to live at Ainola – the house she and Jean had commissioned and lived in since 1904 – until 1969, the year of her death at the age of 97. 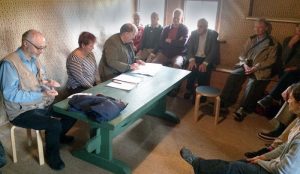 Members of Sibelius One at the 2019 AGM. Photo: © Rob Ebbers

Sibelius One’s 2019 AGM was held at Ainola on 5 September.

Members may read or download minutes of the 2019 AGM by clicking this link. Please note that you must be logged in to the site in order to access the page. Also available on the same page are short accounts for 2018 and an updated version of Sibelius One’s constitution.

Fennica Gehrman has signed a publishing agreement for a concert overture by Sibelius. Based on material found in the manuscript of the opera Jungfrun i tornet (The Maiden in the Tower), it was discovered by the conductor Tuomas Hannikainen, following references made by Sibelius himself. A significant work that, according to Hannikainen, stands up well on its own, it lasts 11–12 minutes and was conducted by Sibelius at concerts of his works at the Fire Brigade Hall in Turku on 7 April 1900, and the next day at the Old Academy Hall in the same city. The reviewer of Uusi Aura called the piece a ‘ballad’ that ‘attracted much attention’; his colleague in Åbo Underrättelser mentioned that the piece had not been performed in Turku before, and was received with ‘sympathetic applause’, though conceding that it was somewhat overshadowed by the suite from King Christian II. The score of the overture is scheduled for publication in autumn 2019.

Previously it has been assumed that the overture performed in Turku was just the orchestral introduction to the opera, some three minutes of music that lack an effective concert ending. When examining the original manuscript, however, Hannikainen became curious about some markings and changes, apparently in Sibelius’s handwriting. Through extensive research into the manuscript and other sources he was able to reconstruct the longer overture, i.e. the Concert Overture.