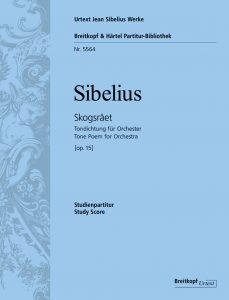 The study score edition of Skogsrået (The Wood-Nymph) reproduces the text from the critical edition (SON 609), edited by Tuija Wicklund. This 22-minute tone poem from the 1890s was unheard and unavailable for many years; its triumphant return to the concert repertoire took place in 1996, when Osmo Vänskä performed it with the Lahti Symphony Orchestra, and it is now rapidly assuming its rightful place among Sibelius’s major orchestral works. There is also a simplified, abbreviated melodrama version for narrator, piano and small orchestra, but the present study score is of the full version for large symphony orchestra. (There is also an earlier song based on the same poem, but that has very different thematic material.)

Based on a poem by Viktor Rydberg, Skogsrået is an episodic work that – to a far greater extent that usual with Sibelius – relies on ostinatos for the generation of its considerable cumulative energy. With rich scoring and characteristic melodic invention, however, it is fully worthy to stand alongside his other music from this period. The opening section has the swagger of the Karelia Suite; the ensuing fast music anticipates the intensity and vigour of Lemminkäinen and the Maidens of the Island; the ‘love scene’ is warm and deeply felt, while the monumental concluding Molto lento (subsequently extracted by the composer for a piano solo arrangement) arguably surpasses even the finale of the Second Symphony with its inexorable build-up of volume and orchestral power. As Breitkopf & Härtel’s publicity material points out, ‘who would have thought that there were still over 20 minutes of superb orchestral music by Sibelius to be discovered?’

The appearance of an inexpensive study score means that Skogsrået is no longer exclusively the preserve of the professional musician, and Tuija Wicklund’s authoritative preface provides appropriate historical context.

Breitkopf & Härtel have also prepared orchestral parts, which are available for hire. 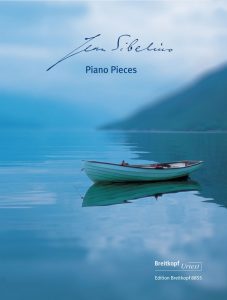 A selection of 18 piano pieces likewise draws on the four volumes of the critical edition, edited by Kari Kilpeläinen and Anna Pulkkis (SON 604, 612, 616 and 623). The works chosen come from most periods of Sibelius’s career, from the early Au crépuscule, JS 47 (Korpo, 1887) up to the Lied, Humoristischer Marsch and Impromptu from Op. 97 (1920), although there is nothing from the time of the Sixth or Seventh Symphonies.

Although the volume contains some relatively popular pieces (notably the Romance in D flat major from Op. 24, Pensée mélodique from Op. 40 and the sixth of the Op. 5 Impromptus), it cannot be described as a collection of ‘greatest hits’: the fifth Impromptu is not included, nor the Caprice from Op. 24, nor any of the Op. 75 ‘Trees’, nor the arrangements of Valse triste and Finlandia. Instead, two pieces are included from Op. 58 – one of Sibelius’s least crowd-pleasing piano sets, written two years before the Fourth Symphony – along with two pieces without opus number (Au crépuscule and Marche triste) which were published for the first time in the JSW edition.

This is all to the good: pianists will buy the volume for the popular items and hopefully then be tempted to include the less familiar music in their recitals as well. Pieces such as the Lied from Op. 97 work splendidly as encores, as demonstrated memorably at a concert in Helsinki by Emil Gilels. Click here to listen to the Gilels performance.

The pieces appear in opus number order (although the order of pieces within groups varies), with the two JS-numbered items at the end. A full listing is as follows: 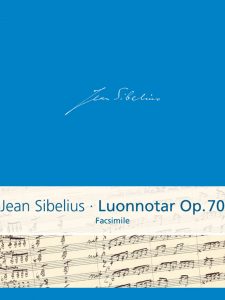 Rather more unusual within Breitkopf & Härtel’s Sibelius series is the release of a colour facsimile of the manuscript to Luonnotar, Op. 70, the great orchestral song first performed in Gloucester, England, in 1913. This work has already appeared in the critical edition (SON 605), and the facsimile was released to mark Sibelius’s 150th anniversary year in 2015. It is the first complete facsimile edition of an orchestral work by Sibelius. In fact two manuscripts are included here: the familiar version for soprano and orchestra and also the autograph arrangement for soprano and piano (this version is also released in the critical edition: SON 606). This volume has an even more ‘premium’ feel than usual in the JSW series owing to the paper quality selected for colour printing.

The volume opens with an extensive and hugely informative essay about the work by Timo Virtanen, and concludes with the critical commentary that is always such a valuable part of JSW publications. As in this case there are no editorial alterations or comparisons of different sources, the remarks instead focus on the annotations made by Sibelius himself, by Breitkopf’s editor Hermann Gärtner (in the orchestral score) and by the work’s dedicatee Aino Ackté (in the piano score). Particularly interesting are the changes that Sibelius made after the first performance, some of which are still visible (though crossed out) in the autograph score.

Links to order these publications:

We are grateful to Breitkopf & Härtel for kindly supplying review copies of these publications.