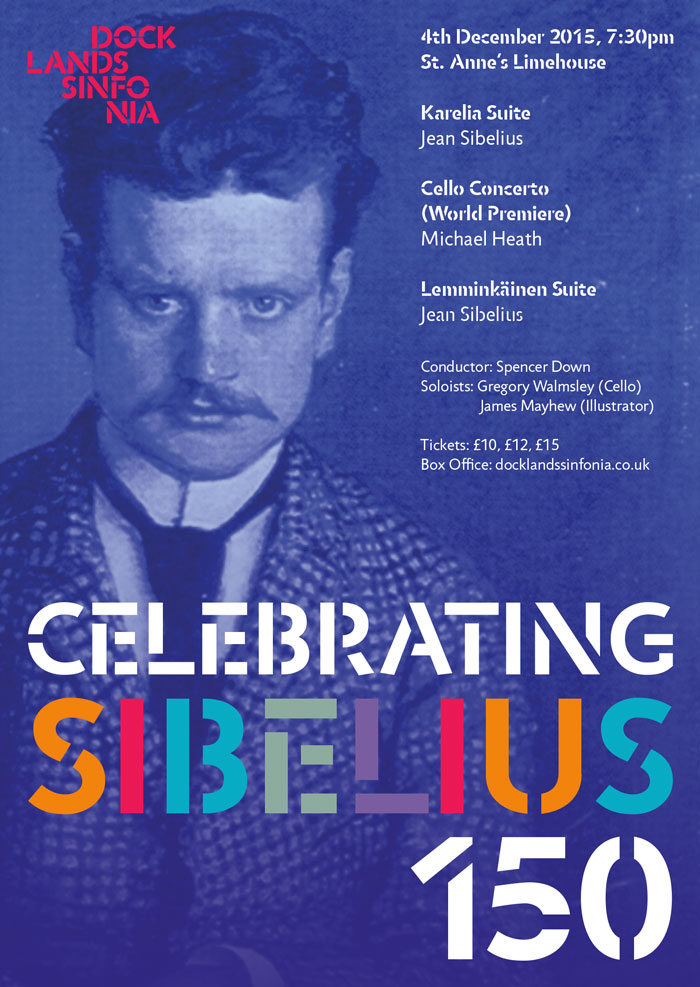 The Docklands Sinfonia conducted by Spencer Down will celebrate the 150th annivesary of Sibelius’s birth with a concert at St Anne’s, Limehouse, Three Colt Street, London, featuring the Karelia Suite and Lemminkäinen, on Friday 4th December at 7.30 pm.

The renowned author and illustrator James Mayhew will bring a special touch to the concert with live illustrations of the stories behind the music as the orchestra plays.

Docklands Sinfonia is young and pioneering orchestra which has become a major cultural force in the Docklands – bringing high quality music to the area, staging ground-breaking concerts and creating a lasting legacy by inspiring generations of young people. Since its formation in 2009, Docklands Sinfonia has enjoyed incredible success with performances for the Queen at Buckingham Palace and with Grammy-award winner Imogen Heap at the Royal Albert Hall. It has appeared on the BBC Radio 3 and BBC1.

The orchestra has recorded albums for leading artists such as Katie Melua and has performed with world-renowned classical artists such as Alison Balsom, Leonard Elschenbroich and Elin Manahan-Thomas as well as the English National Ballet, Royal Opera House and National Youth Theatre. Docklands Sinfonia aims to promote young musicians through commissioning new works and is committed to inspiring future generations of young people by introducing them to the joy of live orchestral music.

Spencer Down is the driving force behind Docklands Sinfonia. He has been orchestral director for high-profile events including a concert for the Queen in the ballroom at Buckingham Palace and the world premiere of Grammy award-winning singer Imogen Heap’s ‘Love the Earth’ at the Royal Albert Hall. He has worked with artists from leading organizations including the English National Ballet, Royal Opera House, London Symphony Orchestra and Scottish Chamber Orchestra, and is brass co-ordinator and assistant conductor at the Junior Guildhall.