Dinosaur fossils discovered near Jyväskylä in Finland have been identified as previously unknown species and have been named Sibeliusaurus.

Remains of a number of the creatures – an adult male, an adult female and five female offspring – were found near the small village of Hoho, in boggy ground that has permitted an unprecedented amount of information to be gathered about their appearance, diet and living habits.

It is believed that Sibeliusaurus lived primarily in what is now Finland, but roamed regularly to neighbouring countries and maybe even as far afield as what is now the east coast of North America.

The creature was an omnivore and the remains found at Hoho clearly show traces of a rich and varied diet – plainly it was an Epicurean among dinosaurs, consuming large quantities of Petersonbergeres (a prehistoric mollusc, distant ancestor of the modern oyster, evidently somewhat indigestible).

Comparable species include the Carolusnielsenisaur, mostly found in Denmark, and the mountain-dwelling Griegoraptor from Norway.

Evidence suggests that Sibeliusaurus preferred to live either in solitude or in large herds, and often remained in close proximity to a number of large migratory bird-like creatures.

The creature’s ultimate extinction was not linked to the infamous meteor strike that wiped out many dinosaur species but seems to have been cause by a genetic mutation. Analysis of the fossilized eggs and young of the species suggests that the creature could produce only female offspring.

Emulating recent research into Tyrannosaurus Rex that has revealed the sound it made (as featured on a recent BBC documentary), palaeontologist Dr Aprilli Pila of the Luonnontieteellinen Museo (Natural History Museum) in Helsinki has released a reconstruction of what Sibeliusaurus sounded like. The audio can be heard here: 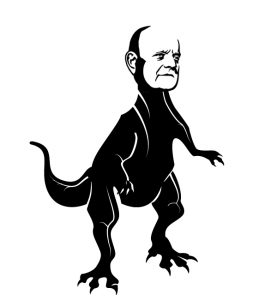